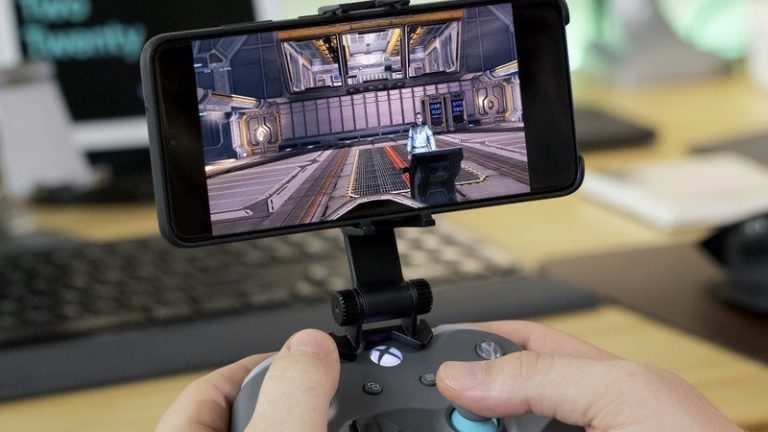 When it comes to playing games via Microsoft’s new beta service, once known as Project xCloud, you’ll need the best phone for streaming. There are also many titles to choose from, so be sure to check out the best Game Pass games you can play on your phone. But for controllers, there’s plenty out there that will do the trick. These are our picks for the best around.

The premier option when it comes to true mobile gaming, the Razer Kishi turns your phone into a Switch-like machine. When not in use, it folds up small, perfect for shoving in a bag. It also has a USB-C pass-through so that you can charge your phone while you play. Overall, the quality is good with solid, clicky buttons and great ergonomics. This one is hard to beat.

The Gamesir X2 controller is one of the best on the market at the moment and wowed us in our review of the controller. Not only is it incredibly versatile, but it makes for an incredibly lightweight, solidly built companion no matter what platform you’re trying to play on. With your phone clipped in, the Gamesir X2 almost mirrors a Nintendo Switch and should play extremely easily for any players who are already familiar with Nintendo’s console.

Got a hankering for a retro-style controller for your modern gaming needs? Then look no further than the new SN30 Pro from 8BitDo. Sporting that classic look with a contemporary Xbox theme, the SN30 Pro is also the best value on our list today. It includes a clip for mounting your phone to the controller, up to 18 hours of battery life, and remappable buttons. It’s truly a steal of a deal.

If you’re looking for one of the best bangs for your buck, then look no further than the SteelSeries Stratus Duo. It can link up to your PC with the included adapter, but we’re more interested in its Android gaming capabilities. It’s quite a good controller with excellent build quality. You will need the extra clip (sold separately) if you want to attach your phone, though.

When talking about Xbox Game Pass, you can’t really go wrong with the new Xbox Core controller. It’s one of the best ergonomic options on the market, and there’s a reason why you see so many copycats. It pairs flawlessly with your phone, feels good in the hand, and just works. There’s not a whole lot else to say about this controller, but even though it’s not the best value, it’s still an excellent option for everyone.

PowerA isn’t sitting out on the Xbox cloud gaming launch. No, it’s coming right out the gate with one of its heavy-hitters. The MOGA XP5-X Plus is similar to the Xbox One controller, but it packs an included clip and a power bank for the ultimate mobile gaming experience. For what you get, it’s a pretty great deal, especially if you like the look and feel of the Xbox One controller and want that extra Xbox aesthetic.

While the 8Bitdo SN30 Pro may be the best for most, the N30 Pro 2 is a compelling option as it’s a bit more compact and comes in a few different colors. This is one of the officially verified controllers by Microsoft to be compatible with Xbox Cloud Gaming, and it’s compact enough to throw in your bag so you can take it everywhere.

When looking at controllers for Xbox Cloud Gaming, you might not think that the DualSense is exactly compatible. But that’s not the case, as the DualSense pairs up with your phone just like any other Bluetooth controller. You just might need to make sure that the buttons are configured properly before jumping in.

The Xbox Elite Controller is designed for professional gamers, and that’s not exactly the perfect use case for Xbox Cloud Gaming. But if you want the best Xbox controller that money can buy to use with your PC, Xbox, and smartphone, there’s nothing better than the Elite Controller.

If you’ve chosen the Xbox One controller, we strongly recommend using a clip to mount your phone to the controller. It just makes gaming more convenient and comfortable. For that purpose, our clip recommendation is the aptly named PowerA MOGA Mobile Gaming Clip. It just clips onto your Xbox One controller and then attaches your phone. From there, adjust the angle to your desired position, and you’re good to go.

Xbox Game Pass launching cloud gaming for Android is a big deal, and we’re pretty excited about it. However, one of Microsoft’s key requirements to play Game Pass games on your device is that you’ll need an external controller since only a couple of games include a touch input layer. So for that purpose, our top pick is the Razer Kishi. It’s a versatile beast and a true joy to use.

Following that up, if you want something that won’t cost you a ton, then the 8BitDo SN30 Pro is for you. Whether you like retro styling or not, it’s still the best value on this list. Not only does the controller pair over Bluetooth, but it includes a clip to hold your phone while you play.

Finally, it’s hard to go wrong with the Xbox Core controller and a clip, but we think the PowerA MOGA XP5-X Plus is the better option. Not only do you get the same ergonomics and feel, but you get a clip included and a 3,000mAh power bank. For its price, it’s a noticeably better deal versus the standard Xbox One controller. Regardless, it’s hard to make a bad choice here.


Get ready for the PS5 with these controllers

With a new generation of gaming comes new games and new hardware, but some of your old controllers can be used with the PS5 — sort of. Here are the best PS5 controllers you should grab.