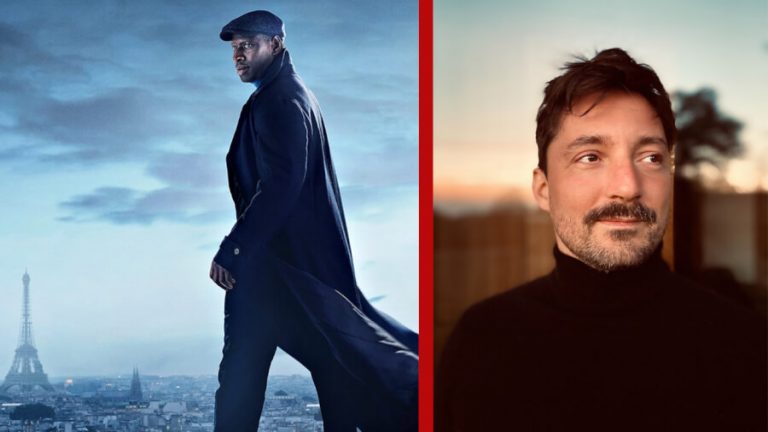 After the cliffhanger finale in Part I, fans of Netflix’s Lupin have been eagerly awaiting the premiere of Part II, now that Assane Diop has become the most wanted man in France. This Friday, the wait is finally over, as Netflix will release the next five episodes. Ahead of the Part II premiere, we spoke with Mathieu exclusively about his work on the show. Read the full interview below.

In case you aren’t familiar with the series, Lupin follows professional thief Assane Diop, the only son of an immigrant from Senegal who had come to France to seek a better life for his child. Assane’s father is framed for the theft of an expensive diamond necklace by his employer, the wealthy and powerful Hubert Pellegrini, and hangs himself in his prison cell out of shame, leaving the teenage Assane an orphan.

Twenty-five years later, inspired by a book about gentleman thief Arsène Lupin his father had given him on his birthday, Assane sets out to get revenge on the Pellegrini family, using his charisma and mastery of thievery, subterfuge, and disguise to expose Hubert’s crimes.  Adding to the suspense and emotion of the show is the score by French composer Mathieu Lamboley. Mathieu constructs a very unique musical landscape for the series, creating a hybrid sound that mixes both classical writing with hip hop beats.

WoN: Can you tell us about how you initially got involved with Lupin? What attracted you to the script?

My French agent heard about the project and the producers organized a pitch. There was a competition with several composers working on a few scenes and he managed to get me on the pitch. I immediately proposed a theme which ended up being the Arsene theme, the main theme of Lupin.  What I liked in the script was the fact that the series is not a remake of Maurice Leblanc’s books, but more a way of continuing the book’s legacy in the present., with this character of Assane living in Paris in the 21st Century.

WoN: How would you describe your score for the series?

If I were to describe it in one word, I would call it a “hybrid”. When I started working on Lupin, I spent some time thinking about what the show really stands for. To me, Lupin is all about heritage, a father passing on a literary heritage to his son, and the latter continuing the legacy in the present time. The question then becomes, how do I translate this in music?  I decided to work on hybrid music: mix my classical heritage with more modern sounds, like I was myself trying to make my music heritage live in the present. And this is what you can hear in the soundtrack: classical writing melting with hip-hop beats.

WoN: Part II of the series was directed by Ludovic Bernard and Hugo Gélin. What sort of input did each of them have of the score for their episodes?

Each director has their own way to speak about music. But in a show like Lupin there’s also a matter of unifying the season throughout the episodes, and it’s part of my job as a composer to create this unity. Ludovic’s episodes were really easy to work on as their aesthetic was totally matching with what I had composed for the first episodes. Hugo was in charge of the final episodes, in particular episode 10 which has a musical sequence shot at the Theatre du Chatelet. Hugo really wanted to make this last episode huge, like a grande finale so I had to invent something really new! A fantastic challenge for me as I ended up composing a symphonic piece.

WoN: How is your score for Part I different than Part II?

In Part I, I introduced the main themes and really explored Lupin’s hybrid musical style.

Part II was a great opportunity to go deeper in my writing. This is what I liked with the series format. For a composer it’s a fantastic opportunity because you have time to develop your ideas. As the episodes go on, you can go a lot further in terms of creativity, because the audience has become familiar with the collective palate of sounds and themes for the show. For the final episode, I wrote a rich symphony where all the themes of the show are blended together. It probably would have been too much in any of the other episodes, but for the Part II finale it was very fitting.

WoN: Lupin puts a meta twist on the stories of master thief Arsène Lupin, which was created by Maurice Leblanc in 1905. Lupin even crossed paths with Sherlock Holmes in a number of stories. Were you familiar with Leblanc’s stories before beginning work on the show? Have you since gone back and read any of them?

As a kid, I was a real fan of Arsene Lupin books, I read many of them, so I knew the character and already loved it. Once I began working on the Netflix show, I did not read them again, maybe because I was too busy composing, but also because I think my mission was to compose a unique soundtrack for the show, not to be an Arsene Lupin expert. Overall, I got most of my inspiration from the show itself, but always had my childhood memories in the back of my mind.

WoN: Did you get to use an orchestra for the Lupin score? If so, can you talk about where you recorded everything?

In different studios, in France and Macedonia. What was important was to work with real people. When you hear a bass clarinet on Lupin, someone was actually recording it. For my symphony in the final episode, we were lucky enough to work with a great French orchestra: the Orchestre National d’Ile de France. We had 72 talented musicians playing my piece. We have excellent musicians here in France and it was important for me to show this too.

WoN: Between Part I and Part II there have been four directors. How do you keep a consistent sound between all the different creative inputs?

When working on a show like this, you spend a great amount of time finding the right color during the first episodes, basically defining the music’s DNA. There are long and rich discussions with everyone from the producers, the showrunner and the executives at Netflix. Once this language has been established, everybody respects this as a key feature of the show. The music becomes somewhat of another main character.  Just like the characters’ personality traits, once you have them, you play with them and develop them even more. You wouldn’t completely change them from episode to episode, just because of the director.

WoN: One of the things critics are raving about is getting to see France up close and personal through the show, with your score making it even more authentic. Because you are French yourself, how do you think your tone and style of music differs from American composers?

I’m definitely a French composer, having studied at the Paris conservatoire, and my favorite composers are Ravel and Debussy. This can certainly be heard in my music at some point.  But what matters most I think is that I don’t try to sound American or ‘international’. I embrace my heritage. Just like the whole show, it doesn’t try to erase its “Frenchness”. I guess it’s part of the interest of a show like this, that has met a broad international audience. People see Paris, the French culture, they can hear our language. And I tend to think I can share French music as well. Then in terms of production, we’re glad to show our savoir-faire, meeting the international standards, while keeping our personality.

WoN: Lupin is a French series, but has garnered popularity all over the world. Part I was projected to have been watched by 70 million people. What about the show do you think people like so much?

I think showing the French culture is part of the appeal, maybe even more during a time where people could not travel easily. And then it’s just a good show! I believe people enjoy the character of Arsène most of all. Omar’s interpretation is fantastic, playful, friendly, and fun with this touch of low-fi tricks. He makes Assanane profoundly human, that’s what it’s all about right?