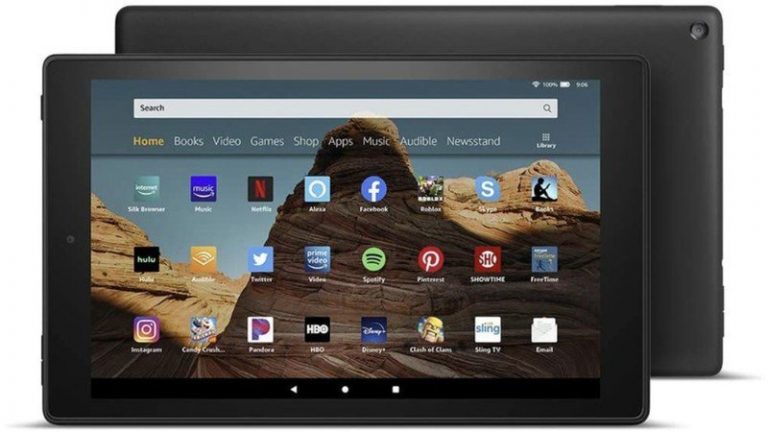 Amazon’s line of Fire HD Tablets are a solid alternative for those seeking a budget-friendly option. At half the cost of an iPad, the Amazon Fire HD 10 boasts good battery life, performance, USB-C port, and even a coveted headphone jack! Its display isn’t glare-resistant, though, so if you’re in the market for a dedicated e-reader, you’d be better off sticking with Amazon’s Kindle Paperwhite.

But for all of your other tablet needs, including gaming, an Amazon Fire HD tablet can be a hub for all your entertainment needs. You can make those long car rides with the kids much more bearable and make the most out of your Amazon Fire HD tablet with these great games. Some of these are already ranked among our best mobile games, so you can’t go wrong.

Drawful is back, and it’s better than ever thanks to new features like custom prompts, censoring options (making it more family-friendly and stream-friendly), and an audience feature that allows potentially thousands of players to join your games. For those unfamiliar with Drawful, it’s a party game where you draw prompts, other players guess what they are, and then those responses become multiple choice answers that players use to vote for what they think the real answer is.

One of the biggest selling points of Drawful 2 is that only one player has to actually own the game. Instead, the owner sets up a room and provides a room code so that others can join in from their own tablets, phones, or laptops by entering the code into a site through their web browser. It’s a great way to get everyone involved, and you’re sure to have some silly shenanigans and loads of laughs along the way.

Games don’t have to be complicated to be good and Happy Color proves that. Happy Color boasts thousands of images for you to bring to life, from nature scenes to hobbies and even Disney and Pixar scenes. Although the game bills itself as a color by number game for adults, it’s just as good for kiddos, too.

Happy Color is also free, which makes it nearly ideal for the artistically inclined among us. Its one big downside is that forced ads pop up every few images, detracting from the more soothing aspects of the game.

Kick back, relax, and soothe your soul with this simple yet satisfying color by numbers game.

It’s hard to believe, but there are some folks out there who still haven’t heard about Jackbox Games. Jackbox and all of its assorted Party Packs feature hilarious party games that pit you and your friends against each other for the coveted crown of victory. There are quite a few Jackbox Party Packs available for Amazon Fire HD tablets. Still, Jackbox Party Pack 3 is my personal recommendation because it has two of my favorite games, Trivia Murder Party and Tee K.O.

At $24.99, it’s a pricey pick for sure, but the replay value is excellent, and only one person has to own the game; everyone else can join a room for free from their own devices!

The priciest game on the list is also one of the most fun and most replayable. Jackbox Party Packs are superb for parties!

Take advantage of the Fire HD tablet’s bigger screen with a traditional jigsaw puzzle game. The peaceful scenes of lakes and forests may be a bit boring for the average child, but if you’ve ever been an insanely bored adult on a plane, then this is a perfect way to unwind and kill some time. Plus, this is just one example from a developer with loads of other options available on Amazon. Puppies, sunsets, waterfalls, you name it, Titan Game has made a jigsaw game for it.

Useful features like pinch to zoom, the ability to use your own music, four different puzzle types, and puzzles ranging from 9 to 1,600 pieces make this a pretty solid free game for your tablet. And if you do ever manage to complete all of them, don’t forget that Titan Game has many more for you to choose from.

Jigsaw puzzles don’t need much explanation. If you like them, then this game is for you.

Put yourself in the shoes of the Silent Princess as you traverse a fantastical world of impossible architecture. This place isn’t always what it seems, though, and you’ll have to be creative and think outside the box to solve Monument Valley’s stunning environmental puzzles. Good for both adults and children alike (rated All Ages), this delightful puzzle game is sure to keep you entertained for many happy hours.

With its minimalist graphics, stellar art direction, and great soundtrack, some people would even consider Monument Valley a perfect mobile gaming experience—myself included! It also has a sequel, Monument Valley 2, so you can move on to the next title once you’ve wrapped up this first installment.

Solve clever, beautiful environmental puzzles in one of the greatest mobile games to come out in the past 10 years.

I have a confession to make: I was addicted to hidden object games for many years. And you know what? They’re still fun! Big Fish Games has been pumping out titles like Phantasmat for many years, and they’re a great addition to the bigger screens of tablet gaming. Phantasmat has a delightfully spooky setting in a classic haunted mansion, mini-games, some light puzzles, and hidden object rooms galore.

Plus, this is the full collector’s edition of Phantasmat, so you’ll have access to all of the bonus and add-on content from the game in one convenient package. The only downside to games like this is that they’re typically fairly short. If you really took your time, you could probably drag Phantasmat out over the course of a few hours, but if you were really on a roll, you might actually finish it in one night. At $4.99, though, Phantasmat is less expensive than seeing a movie and just as fun.

Hidden object games are more fun with a spooky setting, so pick up Phantasmat to get your seek-and-find fix.

Quell Zen+ is a little hard to describe, but man is this game fun. A logic game at its core, Quell Zen+ has you guide raindrops through little mazes to solve 200+ levels of puzzling madness. There are even a few hidden puzzles snuck in there, so keep your eyes peeled as you progress. Accompanied by an elegant, peaceful soundtrack, this title’s calming atmosphere makes it a great choice for winding down before bed.

You can easily sink hours into Quell Zen+, so it’s a real bargain at $3.99. So do yourself a favor and pick up this fantastic puzzle game.

A relaxing yet challenging, logic puzzler, Quell Zen+ is an addictive addition to any gaming library.

At this point, Stardew Valley is synonymous with idyllic farming sim gaming. Stardew Valley came to mobile a few years after the game’s initial release, and it’s a superb title to add to your collection for tablet gaming, benefiting greatly from the larger screen size. In Stardew Valley, you play a character who has inherited their grandfather’s dilapidated farm. Tasked with fixing up the place and creating a profitable paradise away from the stresses of city life, you’ll make friends, explore dangerous mines, help the town, and spend your seasons growing crops and raising farm animals to your liking.

There’s never a dull moment in Stardew Valley, and I’ve spent well over 200+ hours in my own files (I’m up to 3 farms now). There’s even a multiplayer option now so that you can play with friends on the same farm. New updates have been added over the years, so even if you’ve played Stardew before, it may be worth another look now if you haven’t had the fully updated experience yet.

The ultimate farming simulator, Stardew Valley, will give you a second life in pastoral paradise.

Yes, it’s another hidden object game, and no, I’m not sorry. As I said, I can’t get enough of these types of games, and Stray Souls: Stolen Memories is another great addition for Fire HD tablet users. As a mother on a quest to save her daughter, you’ll have to explore a strange town and solve a mystery along the way about your husband’s past to rescue her.

With 48 locations, 14 hidden object scenes, and a bevvy of mini-games, Stray Souls can be enjoyed over a few days or in one big binge session. This is actually a sequel to the first Stray Souls game, but can be played as its own standalone experience. It’s a great deal at $2.99, and I would highly recommend it to anyone who enjoys hidden object games.

Explore a creepy town, save your daughter, and uncover a hidden mystery in Stray Souls: Stolen Memories.

Escape room games are as fun in the virtual world as they are in real life, and it doesn’t get much better than the aptly titled The Room series when it comes to mobile escape games. Of course, 2,000+ reviews and a 5-star rating can’t be wrong, right? The Room Three features a slew of physical puzzling scenarios and a wide variety of beautifully rendered 3D objects for you to inspect, rotate, and interact with as you solve puzzles. Coupled with a dynamic soundtrack and great audio design, The Room Three is a tactile experience that is easy to get the hang of thanks to its intuitive interface.

At just $3.99, The Room Three, and perhaps its siblings The Room and The Room Two, should be high on your list of games to add to your Fire library. Pick this lovingly designed game up now, but be warned, you may not be able to put it back down.

The King/Queen of escape room games just keeps getting better and better.

It’s cool to have a super-slim and minimal case that doesn’t add any bulk, but those cases don’t offer much in the way of protecting your Amazon Fire HD 10. There are many great options out there that are either heavy-duty, designed for kids, or both, so your Fire HD 10 can withstand anything.