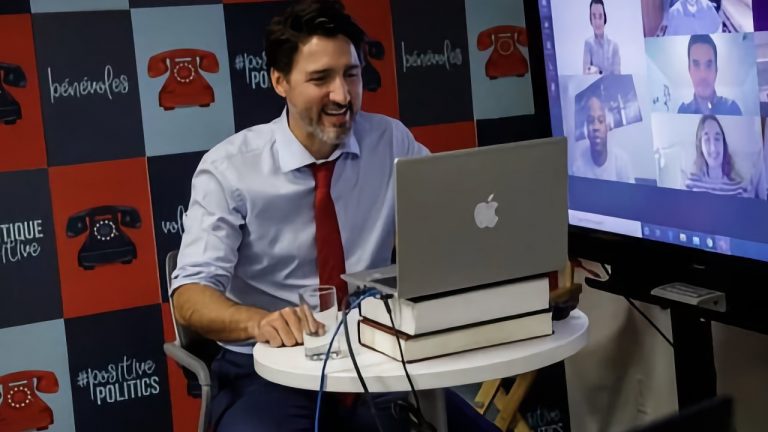 A photograph of Canada’s Justin Trudeau shows him using a HP Windows laptop, which wouldn’t be remarked upon, but it sporting an Apple sticker will be.

Finally, a genuine use for those logo stickers that Apple keeps on shipping. Apple is the company that wouldn’t let Intel put a sticker on its computers, but believes we have a passion for the things.

Maybe some of us do, but there’s passion, and there’s having an outlet for that passion. Someone has got a sticker from a friend and carefully placed it on a Windows laptop. And, Canadian Prime Minister Justin Trudeau used it on a virtual meeting.

Whoever placed the sticker got it in the vicinity of where Apple does, if not quite as precise as Apple’s placement. Unfortunately, they haven’t entirely nailed covering up the Hewlett Packard logo underneath.

And if you want to press for more details about “stickergate,” there’s another one in shot. Just beneath the keyboard of this HP laptop, there’s what is most likely an Intel Inside sticker.

It could be one of those peculiar PC things where there’s a sticker on the chassis to tell you the computer’s specifications. You know, the ones you already saw on the box, the sales receipt, and when you bought the thing.

But specifications or Intel Inside, this is a PC laptop very poorly masquerading as a Mac. To be fair, Trudeau seems to be enjoying looking like he’s a Mac user, and that may also be because of where he’s sitting.

In this PR photo showing a Skype meeting, he is facing the laptop screen so we can’t ee the tell-tale signs of a Windows taskbar there. If only we could look to the right of the shot and see a TV-sized display of that Skype conversation, complete with a live feed of Trudeau from that laptop.

And also complete with the Windows taskbar.

From which we can also see that Trudeau — or someone — is a Chrome fan, although they also has Microsoft’s Internet Explorer. And we can further see that this was staged – sorry, taken at 7:12 PM on October 22, 2020.

It’s fair to say that 2020 was a tough year and we all made do with what technology we could to get our work done. No one can criticize Trudeau for having to get by on a HP Windows laptop, no more than they can criticize the prime minister for using two large hardback books instead of buying a proper stand.

A team laptop borrowed for a moment in the LPC volunteer hub, for a drop-in to thank volunteers virtually during successful by-elections early last fall.

Some especially keen Apple fans there just brought some real change’ to the look of a team’s https://t.co/ALxpoHmLuT

Everyone else on his Skype call appears to be at home or in their own place, but Trudeau stopped by “for a moment” to have a Skype meeting.

Caley clearly thinks this is all pretty trivial stuff. It is, compared to the various ethics, lobbying, and worse scandals that have dogged Trudeau’s premiership.

Trudeau himself might be thinking this is small potatoes, with an image from over six months ago only now doing the rounds. It is, compared with Canada’s current problems with getting the coronavirus vaccine to people.

It is a little hard to disagree, but even if Intel has rather lost its place as the preeminent processor maker, its machines are still faster than Apple stickers.